Disclaimer: This is HELLA long! There is so much I wanted to cover and then realized that trying to unpack everything that is going on for me around white supremacy in my life, in my role, in our organization, and in our project was a bit much. I understand if, as a reader, you might be thinking, “Why on earth would Jenn share all of this?” And to be honest, I think I am hoping that I can write this blog today, in August 2020, as a time capsule of sorts so that when we come back here in 2021, 2022, 2023… we see a different story than the ones I have shared today. So I really appreciate you letting me take you on this meandering journey.

Me and White Supremacy

I grew up in a mostly white neighborhood. I went to public school. I wanted to have peanut butter and jam sandwiches and watch cartoons on Saturday mornings. 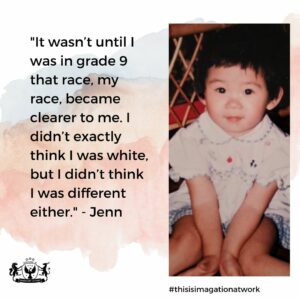 It wasn’t until I was in grade 9 that race, my race, became clearer to me. I didn’t exactly think I was white, but I didn’t think I was different either.

I’m Chinese-Canadian. I was born in Canada. I’m a second-generation Canadian. My parents immigrated to Canada from Hong Kong in the 70s.

These are terms and pieces of my identity that I really didn’t begin exploring and reflecting on until I was in my mid-20s. Even as I started to think more about my hyphenated identity, I didn’t think about how much that hyphen meant to me, my relationship with Canada, or my participation in white supremacy and whiteness.

When I finally did start to think more deeply about my cultural identity and how that shaped me I started slowly thinking more about how much I had craved “fitting in” over a desire to learn more about my family’s culture.

I was embarrassed to have to say my middle name and then always have to repeat myself. I laughed when people asked if I was related to Jackie Chan. I hated going to Chinese school on Saturday mornings and was so relieved when I no longer had to attend. I grew up joining in on correcting my Dad and his Chinese accent. I thought that being second-generation Canadian meant that I didn’t have anything to do with colonization since my family wasn’t in Canada that long. I grew up with pride for my country and city and its commitment to diversity, multiculturalism, and inclusion.

I realize now these are all acts and ideologies of white supremacy seeping into my life and upbringing. This thinking allowed me to integrate into white-led society, organizations, and systems without many barriers. It allowed me to separate myself from responsibility or accountability.

Over the past few months, as an individual and as an organization, we have each been doing our own learning and sharing about how white supremacy shows up in our lives and work.

The very use of the term white supremacy is a tool of privilege, one that we are able to talk about because we are not at risk of being judged by our skin colour and one that we still have the energy for despite all the examples of inequity all around us.

I am not going to use this space to teach you about white supremacy or argue one definition over another, because there are better educators out there for that work. However,  as an organization, we are trying to keep an ongoing list of resources of pieces that have influenced us.

Instead, I am going to talk about how I am grappling with my own relationship with white supremacy and how it shows up in our work.

Me and White Supremacy in the DIA

When I first read Mathura’s reflection, I was instantly in awe of how vulnerable and honest she was about her own relationship to whiteness and white supremacy. I am grateful for Mathura’s leadership in taking our internal conversations into the open.

This felt like the invitation and permission I needed to be more open about where I am at too. I am the co-founder of an organization whose mission is to “understand the evolving definition of what it means to be Canadian from new and developing Canadians.” This is an organization that I feel passionately about and one that I hope will have a long future in re-imagining existing policies, practices, and systems. But there is no way to do that if we don’t also examine our own internal policies, practices, and systems.

For example, what does it mean to be one of two co-founders – one a woman of colour and one a white male – and for one of those people to assume a title that appears to have more power? When we incorporated in 2017, we had a Board retreat and decided that Blair would take on the title of Executive Director and I would be the Director of Programming. We would operate as a “two-headed monster” and make all executive decisions together. We said it didn’t matter which title we had, that we would share power and ownership of the organization but that externally, we needed to establish roles and titles that worked in the system.

As the woman of colour in this situation, I had a lot of feelings about this and then I let them go and now they are back. This is a decision that impacts our organization and it is an example of how white supremacy and whiteness colours our perspectives. Did I let go of a potential power role too easily? Should I have pushed harder to be the Executive Director? Was Blair more qualified to be the Executive Director? What difference does a title even make?

I convinced myself that it didn’t matter that Blair and I had both run our own companies before and that since I would be focusing on programming it made sense for me to have a programming title. I also reasoned that titles didn’t change the role or relationship I had with the organization or my team so I didn’t need to be so nitpicky about the titles.

I was gaslighting myself. Making myself feel like I didn’t deserve the title of Executive Director and that I was being too sensitive and overthinking everything. This is exactly what white supremacy has done to me.

I share this story not to try and gain sympathy or even petition for the title of Executive Director. But to illustrate how existing policies, practices, and systems have enforced that we operate and see the world in a certain way rather than giving space to examine and dismantle how those policies, practices, and systems are keeping us from truly sharing power and ownership.

This seeps into all of our work.

White supremacy in our work

Both Mathura and Blair wrote about how our work with The Stories of Us is influenced by white supremacy and colonization. If you haven’t had a chance to read their posts, I highly recommend it.

In both their posts, two things stood out for me as approaches that we need to continue to take in our work moving forward.

In Mathura’s post, she models what it looks like to name white supremacy: “English, like whiteness, is regarded as the price of admission, and if you can’t pay up, the assumption is that you haven’t worked hard enough, not that the price is unfair or too high.”

In Blair’s post, he models what it looks like to be vulnerable and open in our learning: “I had never really considered the fact that English, the language I was raised to speak and is spoken throughout the world, is rooted in colonization.”

To me, these are two extremely important values we need to embed into our organizational strategy.

I will add one more: how do we re-imagine what this looks like? The Stories of Us is funded as a project of language acquisition and is evaluated as a model that can improve the efficiency or efficacy of someone advancing in English. However, we evaluate The Stories of Us as a tool to bridge cultural divides, reminding newcomers about the power of their own stories, and hopefully evolving the definition of what it means to be Canadian with their voices.

I wish I had a graceful way of closing this off, but I really don’t. I feel like the very lessons I am learning about my relationship with white supremacy just come flying back in my face every time I put something down.

My commitment to learning more feels completely inadequate as an offering but I also don’t have any other solid answers. So I will leave you here with the hopes that in a year from now we can be sharing another chapter to this story.

Jenn found herself in the nonprofit sector 15 years and has spent her professional and personal life since then guiding conversations through questions and yearning for imagination. Jenn identifies as second-generation Chinese-Canadian, a Mama to two kiddos, a passionately struggling idealist, a recovering perfectionist (aka Super Virgo) and navigating pandemic-induced anxiety. Jenn exists professionally as a designer, researcher and facilitator. In her (limited) spare time, she can be found crafting, eating junk food, cuddling with kiddos and floating in water.