I am a cisgendered, gay, white male.

I live and grew up in Toronto, a city touted as one of the most diverse, multicultural cities in the world.

I have traveled the world and have lived abroad.

I live a privileged life, of which I haven’t earned.

I know the meaning of the word “privilege”. But it wasn’t until a decade or so ago that I began to really understand what the word meant when applied to the life I live and how I live it.

At first, the idea of being “privileged” to me sounded as if I were rich and went to some private school. I’m sure the majority of us who live this privileged life felt/feel the same way when it’s applied to them. It took a lot of conversations, and listening, and reading, and internal debates to begin to understand that yes, I am privileged in many ways because of the society and systems that I grew up in. This is an ongoing education for me, one that will last a lifetime. Now that I have a foundation of understanding, I am able to figure out how to use that privilege to help dismantle and rethink the systems that helped raise me up, whilst keeping so many others down. But most importantly, to continue listening.

(And I will point out that the very fact that I was able to take the time to think about all this and figure out what to do, is, in itself, another privilege.)

When we started The Stories of Us, I was excited about the opportunity it presented for us as a way of sharing the stories of the newcomers who had come to Canada with other newcomers and those of us who were born here. What better way to understand more about this country and the people who immigrate here than through the lived experiences of the people themselves?

From the start, we wanted to make sure the home language of the author and the English translation were set side by side as a way of helping the reader understand what the story was about. Our understanding of the challenge of this project (helping newcomers learn English through their own stories) is still core to the project, but as the years have gone on, we have become more and more involved in the settlement sector and dove further into the world of ESL pedagogy. As I tend to take on the more administrative tasks in the organization, I learn more about the shifts and learnings from Jenn and Mathura in our team meetings. I’m always curious to see what they’ve uncovered and how the project might pivot depending on what new information has surfaced.

When Mathura sent us a draft of her blog post for June to review, I read it through it. And then I finished and thought, “Well, sh*t. Why are we even doing this work?!”

I spoke with my partner that evening about my reaction as he is better equipped to navigate these types of existential crises. He calmed me down and assured me that at the end of the day, the work we are doing is good and beneficial.

But we have to recognize that yes, we are working within a system of white supremacy and teaching English is part of that system. I had never really considered the fact that English, the language I was raised to speak and is spoken throughout the world, is rooted in colonization. This is not to say that I had never really considered the fact that English came from Britain which colonized Canada and most of the Western world in some form … but reading Mathura’s (incredibly well thought out) blog post was like finding the last piece to a section of a ginormous puzzle and suddenly the picture made a whole lot more sense.

The sense of urgency that newcomers feel around learning English is also a manifestation of white supremacy culture. We have created a system in which English language acquisition is tied to employment, credit history, housing, social connections, and immigration status (which is linked to access to essential services like healthcare).

Of course learning English is a part of white supremacy. How can it not be? 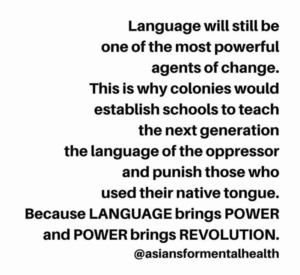 Mathura posted this in her blog, but I think it’s worth reiterating here.

I came across a poem by Kyla Jenée Lacey that stopped me in my tracks: “We learned your English, your Spanish, your French, your Dutch, your Italian. You learned our nothing. You called us stupid. That’s white privilege.”

“You learned our nothing.”

The concept of colonization was taught in elementary school, though not in any particular in-depth way that I recall. We learned of the Indigenous people that lived on this land before the Europeans arrived, but not much about the Indigenous history, culture, or way of life prior to colonization. And of course, it was taught in English – a language not native to this land but was brought here and forced upon the Indigenous people as a way of ensuring they conform to the colonizers / oppressors way of life. And it has been thus ever since.

With everything going on in the world today, it’s like someone took an onion and rather than slowly peeling away one layer at a time to reveal what was underneath, took a knife to it and sliced it in half exposing all the layers simultaneously. It’s a lot to take in and when you look at it, there are layers of centuries of white supremacy that need to be fixed.

This blog post is a bit messy and erratic in its structure, I recognize that. There will most likely be some editing to it before you actually get to read it on our website. Jenn had asked me if I wanted to write this months #thisisimaginationatwork post in response to Mathura’s. I have been reading, and listening, and talking, and thinking again about what transpired in June and just how many layers of the onion there are to go. And this is the first time that I’ve had an opportunity to sit down with my thoughts and put fingers to keyboard to write them down. And my thoughts are messy and all over the place.

But I think that’s okay for now. I still have a huge puzzle in front of me and the pieces are all there, I just have to figure out where that last corner piece is and start filling in the rest of the picture for myself. At the same time I also have to remind myself that I need to listen and support the amazing work of BIPOC and ensure that their voices are heard, celebrated, and empowered by being an ally.

It’s going to take time and I’m ready for that life-long learning ahead.

I will finish by thanking Jenn and Mathura for continuing to push The Stories of Us further and digging in deep to understand the various twists and turns the project has lead us down. I also acknowledge that The Stories of Us was created as part of a system that perpetuates the language of white supremacy. And finally, I vow to continue to learn in the school of life about the systems that have given me the privilege to be where I am today and how I can help dismantle them.

Blair is a trained playwright, designer by trade, and traveler for life. He is the Executive Director of the DIA and loves all kinds of food.