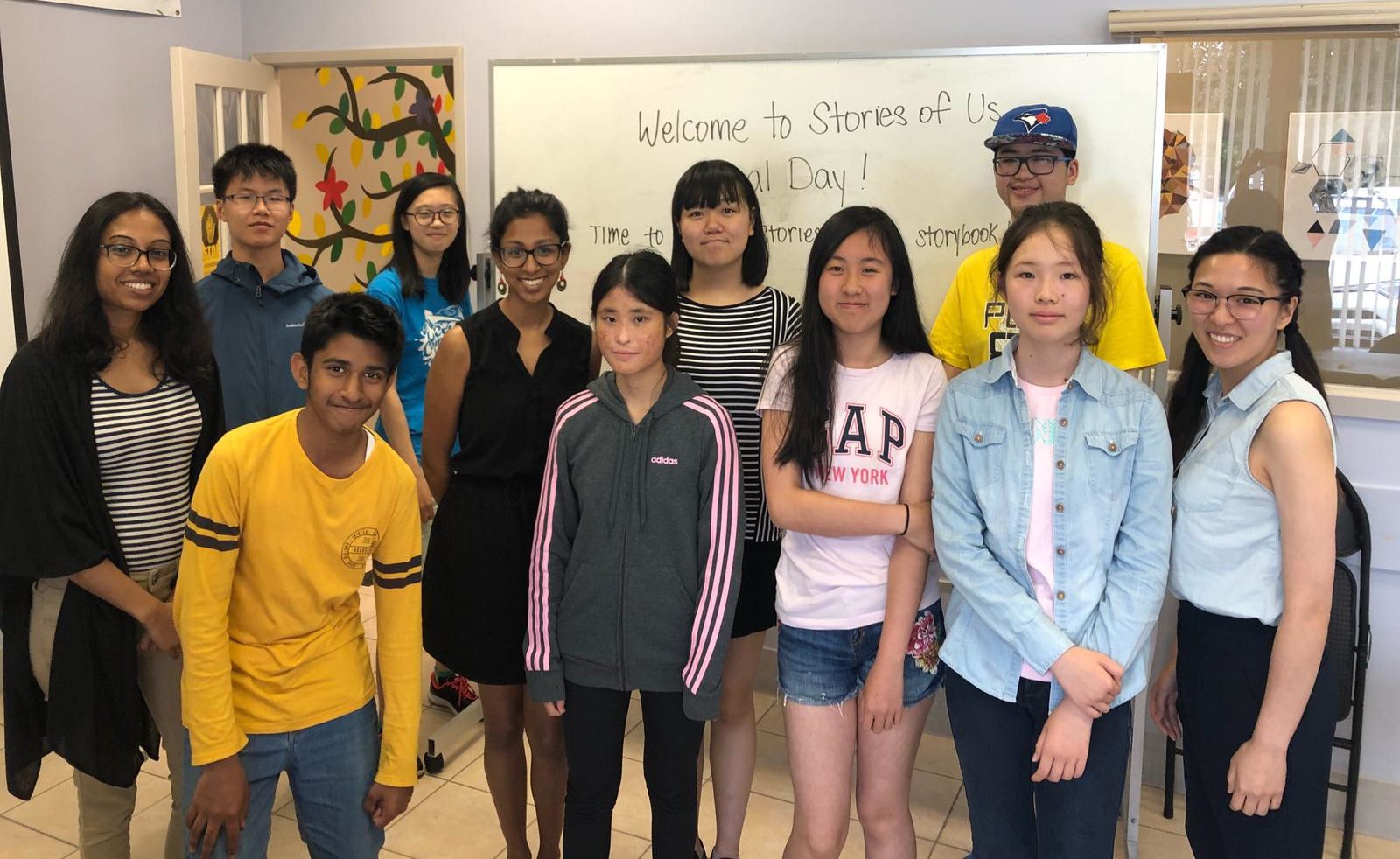 Earlier this month, I had the opportunity to facilitate our first ever The Stories of Us workshop series for youth. We partnered with the Immigrant Youth Centre at CICS Markham to host a 4-day storytelling and story writing camp from July 2-5. We started at 10AM every morning and wrapped up by 1:30PM each day, with a 30-minute lunch break in between. Nine newcomer and first generation youth, all of them high school students, participated in the workshop series. The curriculum for the workshop was co-designed with the youth workers at IYC, who also supported the facilitation of the workshop. Following the last workshop, four youth workers at the IYC participated in an interactive train-the-trainer session that would enable them to deliver the same or similar workshop to youth in the future.

Over these whirlwind four days and the opportunities for debrief throughout, several key reflections emerged:

As a facilitator, I rely on cues from my participants to gauge how they’re feeling, whether they are understanding my instructions, and ultimately to determine how to proceed. In this sense, receiving blank stares and radio silence when prompting participants to share their thoughts or engage in discussion was both alarming and disorienting. I didn’t know if they didn’t understand, if they simply didn’t want to engage, or my biggest fear, if I was making them miserable. At least with the adult newcomers, they would tell me if they were experiencing any of those emotions. It was almost as though I had forgotten that teenagers could be a different species altogether. At one point early in the series, I found myself asking the youth workers, “Am I doing something horribly wrong? Do they hate me?” To this, they laughed and reassured me that they too were used to this kind of response. This is not to say the youth were entirely unresponsive. They participated (albeit hesitantly) in all of the icebreakers, wrote at length about difficult experiences in their lives, and came alive when co-creating fictional stories as a group. Where they froze, however, was when they were asked to share their own personal thoughts / opinions / experiences with a group of peers. The social risk of this, particularly in a group where so many had experienced bullying, exclusion, and feelings of not belonging, was too high. As a facilitator, understanding this layer of their reality was useful in not taking their silence personally, as well as for creating opportunities for them to share in safer ways.

Given their discomfort with sharing their stories within a group setting, we were intentional about designing activities that would allow participants to broach this edge in a safer way. We facilitated the sharing of their hopes and fears for the workshop series by having students write them down anonymously on pieces of paper that were then crumpled, thrown around the room, and then retrieved and read aloud by another participant. Having learned that open-ended, discussion-based questions yield silence, we asked participants to share one word to describe how they felt at the end of the first day. Having read the rather vulnerable stories that were depicted in the abstract paintings that the youth created on day 2, we waited a day and had participants do a gallery walk of the paintings (without the accompanying stories) on day 4. We asked them to look at each painting and write 1-3 words that it conjured for them on a Post-It next to it. When students returned to their painting, we asked them to share the comments that resonated most deeply with them. In such few words, participants felt seen and heard as they saw their fellow peers interpret their art and the underlying emotions in the way they had intended. On the last day, we gave students several options in which they could share their story with the class if they wished: (1) not sharing it at all, (2) having a facilitator read it anonymously, (3) having a facilitator read it and mention the author’s name, and (4) reading their story themselves. In providing these options, we went from nobody wanting to share to two people choosing option 2 and one person choosing option 3. To increase the safety of the space, we asked participants to keep their heads down and eyes closed as they listened to the stories.

“I now view my stories as lessons to be learned, instead of memories to be pushed away. I realized the importance of reflection and communicating with others about my experiences, verbally or non-verbally.”

In addition to having youth write and contribute their stories to The Stories of Us project, one of our objectives through this workshop series was to equip them with storytelling/writing tools that they could then use outside of this camp. We taught list poems as a way of brainstorming ideas to write about. We asked them to paint an experience that they had had before writing about it, so they could artistically explore the emotions and imagery it bought up. We had participants embody and tell the stories of inanimate objects as a way of activating their creativity and as a potential tool for overcoming creative blocks. We facilitated a visualization exercise in which participants could imagine in detail the story that wanted to be told before moving into a free-writing session. And last but not least, we closed each workshop with a breathing-based meditation that was intended to help participants close up what they had opened in the workshop and leave feeling a sense of groundedness and control over their experience. Based on participant feedback, these tools were a highlight of the workshop for the youth.

Investing in creating space for stories to emerge pays off

Because we wanted to give participants free reign over the story they chose to write for their storybook, we intentionally did not ask them to write on any particular topic (e.g. mental health, their experience as a child of immigrants, their hobbies, etc.). At the same time, many students expressed in the first session that one of their fears was that they would not be able to think of something to write about. To balance these needs, we spent the first two of four days prompting participants to reflect on their experiences in different ways. We showed them videos of digital stories created by other newcomer youth, each exploring a different topic (e.g. queerness, gaming, mixed-race identity, having an accent, etc.). We encouraged them to dig deeper than the stories that they’re comfortable telling on the daily and instead explore ones that would require some courage to share. We gave them space to explore topics through painting and poetry. We had them map out key moments in their lives as inspiration. We led a visualization that was intended to help youth identify the story that they wanted to tell AND that their audience needed to hear. While spending half of the workshop series focused on opening participants up to potential topics might seem excessive, we witnessed the fruits of this labour on day 3. In the free-writing session that followed the visualization, the room went silent and the participants did not look up from their papers. The days of priming and the permission to write an imperfect draft helped students write in an uninhibited way.

Given that we did not limit participants to specific themes, it was interesting to see the themes that arose in the stories they chose to write. Participants wrote about a range of topics including: struggling to fit in, struggling to make friends, being bullied, overcoming self-limiting beliefs, friends who helped them feel like they belonged, realizing that they can chose to change their reality, their favourite sport, experiencing loss for the first time, struggling to do well in school, and the importance of both lightness and darkness in one’s life. Judging by the silence in the room during discussion, we were surprised by the depths that the youth were able to explore in their writing, despite their resistance to sharing these stories with their peers. As facilitators, we also felt trusted as participants knew that we would be reading and typing up their writing after each workshop.

Building in icebreakers and energizers

One key difference in the design of youth workshops compared to the adult workshops was the use of icebreakers and energizers. While a single icebreaker or introductory exercise typically suffices for adult workshops, the youth in this workshop series were significantly more engaged as a result of starting the day and resuming after lunch with energizers. Starting the workshops at 10AM the week after school was out meant that physical stretches were key in waking up the youth every morning. Energizers that were intended to wake up the brain either involved oral storytelling (often collaborative) or some sort of game (often competitive) through which we could model and discuss key themes (e.g. inclusion and exclusion). Notably, these activities were not a part of the original curriculum I had drafted and were a suggestion from a youth worker at the Centre who works directly with the youth. Once again, the opportunity to co-create with our partner organization helped us deliver a workshop that was better, more engaging, and more enjoyable for participants.

“I enjoyed how we played games along the way and were doing calm exercises to cool down, relax, and just focus better.”

Although it resulted in a long day, scheduling the train-the-trainer session to be directly after the last youth workshop was useful for several reasons. Firstly, having just run the activities with students, the insights on how to frame them were fresh in our minds. Secondly, we were able to provide the trainees with specific examples of how participants reacted, the questions they had, and the kind of feedback they provided. Lastly, given its timing, the trainer-the-trainer session doubled as both a debrief for the facilitators that were present in the youth workshop series and as a learning opportunity for those who were not there but hoped to facilitate something similar in the future.

All in all, I feel really lucky to have had the chance to bring The Stories of Us workshop to an entirely new demographic of newcomers. It pushed us to consider the limits of our existing curriculum, and personally pushed me to design from a place of empathy for a younger self. It surfaced stories that we don’t yet have represented in our online library, as well as key insights that will inform any future engagement with youth.

Mathura is a design researcher by nurture, and a storyteller by nature. She holds a BHSc from McMaster University, and three-quarters of a MDes from OCAD University’s Strategic Foresight and Innovation program (#thesisinprogress).