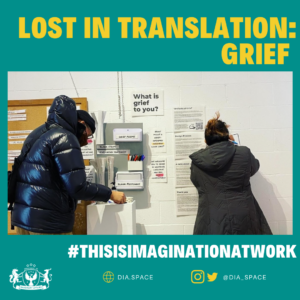 On January 29 2022, the DIA team went to support Jenn (our CEO!) with her “Artifacts of Grief” DesignTO Installation, which highlighted the definitions, thoughts and feelings that frontline workers have about working with and experiencing grief. After participating and engaging in discussions with frontline workers and asking them to contribute a five word sentence about grief, we were left with a grief poem, collectively written by all of us. I was moved by the vulnerability of the participants and the beautiful poem we all wrote together which personally led to new discoveries about my experiences with grief.

While at the installation, I was immediately reminded of my immigrant parents, asylum seekers fleeing a country that was far more dangerous than the idea of leaving an entire life behind. I think about the grief my family members who didn’t immigrate feel, stuck in Sri Lanka and forced to witness their families breaking apart, challenged by distance and uncertainty. I think about how their physical safety took precedence over their desires to raise their kids together, to be at each other’s weddings, to grow old together. I think about all the things that have changed in Sri Lanka since then, and all the things that have stayed the same.

After the workshops, we took our grief poem and translated it into languages representative of the communities in the Toronto/Scarborough/York West area. While translating the poem into Tamil with the help of my father, I realized how much can get lost in translation, and the way that impacts how people process and deal with grief. The biggest surprise for me while doing the translations was that there is no singular word for grief in the Tamil language.

I tried explaining the concept of grief in different ways to my father to try to see if he could think of a word that would encapsulate that, but the closest we could get to “grief” was ‘sadness’ or ‘feeling heavy’. It shocked me to think that a country that spent 30 years in war, killing hundreds of thousands of its citizens and displacing 3 million people did not have a word for grief, for the only collective feeling that was bringing the country together in a time of division.

These are a few statements that were said in the grief workshops that challenged what I thought I knew about grief.

When I think about these ideas on grief and compare it to my parent’s lived experiences, I realize that grief is often a response to loss, the beginning of processing losing something and coming to terms with it. Sri Lanka may not be a war zone anymore, but that doesn’t mean it is free from corrupt leaders, political upheaval, over-policing their citizens, or the uneven distribution of resources. In fact, every year that I have visited Sri Lanka, there seems to be another political crisis of some sort, shaking up the country. At this point, I am desensitized to the trauma that has happened there, to the trauma that is still happening there. I wonder if the reason there is no Tamil word for grief is because Tamil Sri Lankans have not yet been able to begin processing the loss that has lasted for decades on their soil.

So much of the history of Sri Lanka reminds me of what is happening right here on Turtle Island. While I am still learning about the histories of Indigenous communities here, I realize the ways in which my parents’ history reflects those of the communities that this land was stolen from, and how much of the pain and intergenerational trauma faced by Indigenous communities to this day is something my people also struggle with. Last year, I read Seven Fallen Feathers by Tanya Talaga, a story about 7 Indigenous teenagers who died in Thunder Bay, forced off of their reserves to access a high school education and therefore isolated from their families and communities. An important read for my education about what really happened here, but a hard one. I think one of the things that hurt the most was realizing that these deaths were fairly recent, and Indigenous communities still face these dangers caused by racism, ignorance and bigotry. As I learn more about Indigenous history and grief, I hope to be more mindful of the fact that many Indigenous folx do not have the privilege to grieve, as they are still experiencing the harm that their ancestors first experienced when everything was taken from them.

My parents’ lived experiences have also taught me about the richness of community. They would not be who they are or where they are now without their people. While it has taken me some time to find mine, I am so grateful to now be in an environment where I can confidently say that I feel safe and protected. While there is no way to control external oppressive forces in my life, having a community now makes me believe that no matter what, I’ll be okay. My ancestors & family and millions of other Tamil Sri Lankans have been through hell, and while we may not have a word for grief, we do have words for “community”, for “love”, for “healing”. Perhaps for now that is enough.