And you, Ma – so fair you would “pass” for white, like the time we were in the Sears department store and the blond clerk, bending down to stroke my hair, asked you whether I was “yours or adopted.” Only when you stuttered, your English garbled, gone, head lowered, did she realize her mistake. Even when you looked the part, your tongue outed you.

One does not “pass” in America, it seems, without English. 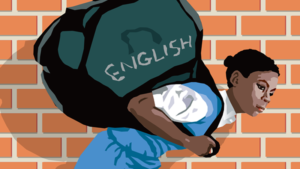 This post is a continuation of and companion to a post that I wrote at the end of June 2020, which includes reflections on my own internalized white supremacy, and the manifestations of White Supremacy Culture in the ESL and settlement sectors.

I’ve been coming back to Jones and Okun’s (2001) Characteristics of White Supremacy Culture quite a bit over the last seven months. I find that whenever I feel an ickiness, misalignment, or discomfort in my body around the work that we’re doing, it often gives me the language to name exactly how my individual and our collective internalized white supremacies are showing up in the way I/we be and do.

I/we work in a system that teaches and preaches a colonizer’s language.

This line from my June blogpost elicited a range of reactions, from “Yupp.” to “I never thought about it like that.” to “This is a debilitating realization and I don’t know where we go from here.”

I’m starting to realize that this debilitation, and the sense of helplessness that it feeds, is by design. It is one of the withdrawal symptoms that kicks in when we try to wean off of the drug that is white supremacy. The discomfort feeds the addiction, by making the addiction feel more appealing than the (admittedly painful and uncomfortable) recovery.

It’s a skillfully designed drug, I’ll give you that much. In a world of complexity, contradiction, and chaos, white supremacy offers us the following illusions1 (among others):

One of the (albeit slow and steady) flight paths out of white supremacy, I’ve realized, is in the practice of holding multiple truths. This practice can serve to counteract each of the illusions listed above.

Truth A: English is a colonizer’s language and teaching and preaching English in the settlement sector is, to some extent, complicity in the colonial project that is Canada.

Truth B: Within the current context, a newcomer’s level of English proficiency is a key predictor of and/or prerequisite for surviving and thriving in Canada.

Both of these are true. Holding them side-by-side, for me, brings up shame and guilt, and compassion around my participation in a broken system that causes harm in the name of “helping you integrate”. Holding steadfast to Truth A alone would have me drowning in shame. Holding steadfast to Truth B alone would give me a free pass to maintain the status quo because “that’s just how it is.” Holding both simultaneously allows me to see that there was a beginning, that English supremacy wasn’t always the case. It allows me to see why we continue to be in the middle of this. And it gives me the space to see what is needed to carve out an end to the status quo and birth ancient beginnings2.

Truth C: Being able to understand and communicate in English as a newcomer to Canada can build confidence.

Truth D: The process of learning to understand and communicate in English breaks confidence in newcomers before it builds it.

Holding Truth C alone justifies the way we currently approach English language learning for newcomers, including enforcing English language proficiency as a prerequisite for accessing citizenship, meaningful employment, and all the privileges that accompany them. Holding Truth D alone, in all of its entirety (see newcomer reflections on learning English from June blogpost), means accepting that the process of learning English can be traumatic3, a microcosm of the broader experience of settlement. Holding Truth C and D together, where the former describes a desirable outcome (i.e. increased confidence) and the latter questions the integrity of the process, leaves us someplace grey. In an ideal world, we would stop inflicting the trauma, specifically the programmed erasure of newcomers’ home languages and accents in order to maintain English/white supremacy. This involves big systemic shifts, and I’m not sure we have viable alternatives lying around at the moment to catch us in the inevitable fall that comes with disruptive change. In the (temporary) absence of the ability to stop inflicting the trauma altogether, holding both truths allows us to ask: How might we mitigate harm? How might we support healing? How might we create opportunities to build a sense of connection and community through this often isolating and frustrating process?

One last time, I promise it’ll come together.

Truth E: Accents are natural and serve as markers of our distinct lineage and diversity.

Truth F: It is harder to learn and understand many different Englishes (i.e. English spoken in many different accents / dialects) compared to “one perfect, unblemished English”.

Holding Truth E alone gives me the affirmation that I need to support newcomers in honouring, preserving, and finding pride in their accents. In this sense, our accents are a form of involuntary resistance, our mother tongue commanding its presence and resisting its erasure as we try to override it with a foreign tongue.

Holding Truth F alone builds my empathy around the challenges of trying to understand countless different ways of speaking the same language. The process of understanding “many different Englishes” is challenging for newcomers especially, as they’re learning a new language, and to a lesser extent for native English speakers who are likely to be exposed to different accents in this so-called multicultural country.

Holding both Truth E and F together makes it clear to me that this frustration is rooted in the idea of “one right English”, another manifestation of white supremacy culture, and that doing away with this expectation could create the space for a different baseline. For example, what would it look like if the onus was on all of us, not just newcomers, to train our ears to be able to understand the “many different Englishes”? What if we could see those that are not like us, “the other” in the language of white supremacy, as teachers instead of threats? What if there were embedded opportunities for ESL teachers to learn and understand the mechanics of their students’ home languages so that they can facilitate their English learning process in a way that meets them where they’re at?

As is clear in each of these cases, holding both truths together actually pushes me / us toward action, toward envisioning alternative futures. It is a myth, one no doubt promoted by white supremacy, that holding multiple truths leads to paralysis and inaction.

As per usual, I end with more questions than answers, ones that I hope you will join us in exploring. In the vein of holding multiple truths, I ask you this:

Knowing that English is a colonizer’s language, and in the act of demanding it as a prerequisite for success in this country we are, to some extent, participating in and perpetuating the colonial project, how might we:

[1]  One question that can help wipe the sheen off of these otherwise attractive illusions, is asking “Who?” Who determines what is objective? Who determines which way is the right way? Who determines the options available in an either/or choice? Whose comfort? Asking “who?” names the guest that is present at every table, yet nobody wants to acknowledge: Power.

[2]  “Ancient beginnings” is a term and concept I learned first from Leanne Betasamosake Simpson, in her book As We Have Always Done: Indigenous Freedom through Radical Resistance. The following is a quote from the book. “…the present, then, is a colliding of the past and the future. Everyday embodiment is therefore a mechanism for ancient beginnings.”

[3]  I don’t the word “traumatic” lightly. While this may not be the norm, we had an ESL teacher proudly share with us that they charge their students a loonie every time they speak their home language in the classroom, and then throw a pizza party with the money that has accumulated. While I can see the teacher’s intention to try and disincentivize the behaviour that they deem undesirable in an ESL classroom, I think it’s also important to question the ethics of framing speaking one’s native tongue as a cost, particularly in a context that maintains English supremacy.