I was filled with emotion upon hearing that Department of Imaginary Affairs’ founding Executive Director, Blair Francey, had made the decision to step down. How do you begin to say goodbye to someone as integral and transformational to the work as Blair was to DIA? As co-founder and Executive Director, he lifted our work up and supported staff and the Board in his quiet, calm, and consistent way. I remember my first time meeting Blair and Mathura over coffee to discuss a workshop where I’d volunteer for the first time. It feels like so long ago, but I’ll always remember Blair’s kindness towards me and his passion for the work. I am so grateful for the role he’s played in getting us to where we are today; his leadership and hard work have opened many doors for the DIA.

So thank you, Blair, for all the things you’ve made possible and for being who you are. The Board, staff, and stakeholders in DIA’s work are going to miss you, though we know you’ll always be part of the team. This is a big change but one I know we’re all facing together, and I look forward to the next chapter in your DIA story.

I learned a new term recently: Lifequake. It essentially means an event that suddenly changes your life. We’re all going through one with COVID-19 right now. But recently I’ve had a few others that, in comparison to a global pandemic, register slightly lower on the Richter scale.

2020 has, for many of us, pushed us to our mental, physical, and emotional limits. There has been a never-ending deluge of events that have piled on top of one another, and it’s going to take a long time to process what we’ve gone through. It has been an exhausting year for all of us. Personally, it has forced me to do a lot of soul-searching and reflection.

One decision that has come from this is that I will be stepping down as Executive Director at DIA. This is not where I imagined I would be 5 years ago when Jenn and I co-founded the organization, but it’s where I find myself now. It has been an incredible journey and I am so incredibly proud of where we have been able to grow the organization to.

But more than that, I have learned a lot about myself and who I want to be in this world.

As I think about the past five years, there are three main takeaways from my experience: 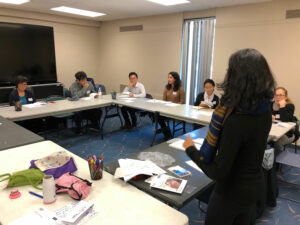 Stories are key
I have always loved storytelling. It’s always been a part of who I am. I studied playwriting at school and was determined to make a go of it as a professional storyteller. While I now find myself working as a designer, the root of storytelling is still core to what I do. But never have I witnessed how deeply important being able to tell ones story from a truly authentic place, than at the very first workshop we held for The Stories of Us during Culture Days in 2018. Mathura, Alex and I were brought to York Woods library to conduct a workshop with newcomers.

Under the guidance of Mathura’s incredible facilitation, the participants wrote love letters to their home countries and drew their life as a river and ended by writing a short story about their experience of coming to Canada. I believe, for many of these participants, this may have been one of the first times that they had been able to tell their own personal story without judgement. They all came from different backgrounds, but they all had something to say and were so eager to tell everyone else about who they were and what they had been through. The love letters to their home country brought them to tears and it took everything I had to not break down in front of them as they shared how much they missed the smell of their old home or the laughter they shared with friends.

There is something so incredibly powerful to be able to tell your story and to have someone listen to it. I have always considered The Stories of Us as not only a way for newcomers to tell their stories and learn English, but for those of us who were born here to understand, to empathize, to relate, perhaps, to the struggles and joy and sadness and determination and fear our new citizens have had to go through to build a new life in this place they now call ‘home’. We can only know one another truly if we know each other’s stories. 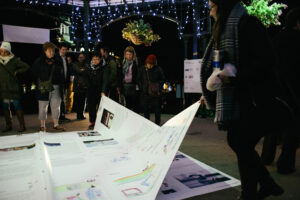 Collaboration is necessary
Building DIA from the ground up was not a one person endeavour. Over coffee one day, I told Jenn about my experiences as a volunteer at the Ministry of Stories in London while I was doing my Masters there. I wanted to do something similar in Toronto called Department of Imagination. She suggested Department of Imaginary Affairs, and we were off. We worked to nurture this idea from its infancy into something tangible, resulting in our first project, The Storybook Project. We floated the idea for a giant storybook full of stories from people living on the East side of the city to friends and family and colleagues and before you knew it, we had some funding, our first paid staff member (Linda!) and acceptance into Nuit Blanche!

From there we took time to figure out next steps: what did we want to focus on? Where do we see this organization going in the future? Who can we rope into going on this crazy journey with us?

When we decided to become a real not-for-profit, it was largely thanks to the people we had gathered as our Board of Directors who really helped shape who we were, and what we were going to do in the future. We broadened our scope from a small geographic area in Toronto to the entire country. Having a supportive board who believed in the organization and its mission propelled us to think bigger and bring in new ideas and new ways of thinking.

If it hadn’t been for a coffee with Anne McGreggor-O’Neill one day where we talked about the struggles of teaching ESL to adults using books that really didn’t relate to them or their experiences, The Stories of Us may never have become a reality. And if we hadn’t been introduced to the Mennonite New Life Centre of Toronto, we may never have met Teresa Wiens, who has fully embraced the philosophy of the program and has been instrumental in developing a new curriculum based around the stories we have in our newcomer library and now sits on our Board. And so forth and so on.

Everyone who has either heard our name, been drawn in by our logo, read one of the newcomer books or been a part of a workshop and then gone on to volunteer for us or connect us to others has had a hand in helping grow DIA. And for that I am eternally grateful. 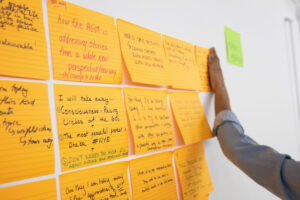 Different is important
Jenn and I saw an opportunity to do something a bit different with DIA. There are a million not-for-profits out there doing unbelievably good work in every corner of this country. Having worked in the not-for-profit sector before, I understood the struggles that come with the territory. It can be an unforgiving, frustrating, exhausting environment to work in. Organizations who operate as a not-for-profit are trying to do good in the world. They are trying to make a difference. And it baffles me that it is such a struggle to do that work. One would think that this type of work would be supported whole heartedly and those who see things in a different light or bring new ideas to the table would be welcome with open arms.

What I’ve seen time and time again and now experienced first hand while at DIA, is that being a not-for-profit that doesn’t fit into the mould is an extremely frustrating experience. There is so much talk of innovation in the sector but I find that there is so little money to actually put any innovation into practice. And when you do find it, as we did, it can sometimes come with so many strings attached that one might wonder if it’s worth it the hassle. I don’t want to sound ungrateful for the funding that we did receive. Trust me. We wouldn’t have been able to do anything we’ve done in the past three years without it, but I feel the system of funding for not-for-profits to be backwards.

As humans, we learn by failing, as practically every species on the planet does. We learn by doing and by taking chances and risks and not everything we do is going to work out the way we want it to. But that’s part of the process. That’s part of the story. We have to try or we’ll never know if A, B, or C is the right decision. As a not-for-profit, we have so many restrictions placed upon what we can and cannot do that sometimes it feels like we aren’t allowed to fail without knowing precisely why and how much it costs us to do so.

We try not to think the same way every other organization does. Maybe it’s because we are so new and haven’t been around for years and years that we come to the table with different ways of thinking about how to operate. I credit Jenn and Mathura largely for pushing back against the norm and always willing to look at everything from a different angle. I think, in the case of The Stories of Us, because we aren’t steeped in the world of newcomer services, we are able to look at the sector from an outside perspective and ask questions that perhaps others hadn’t thought of before – because there’s no time or money to allow for those questions to be asked.

I believe DIA offers a different lens to look at challenges that present themselves. The organization is curious at its core and I think the fact that we develop projects based on not something that we see as a need, but challenges that others come to us with makes us different.

DIA has set me on a path of learning that will last a lifetime. We have had a lot of discussions internally, especially in the last year, about anti-racism, Black Lives Matter, and how the work we are doing with The Stories of Us perpetuates English as a colonizers’ language for newcomers to Canada. These are difficult, important, and necessary conversations to have. I talked about my experiences with this in an earlier post. These conversations and putting words into action are something I think about on a daily basis and am actively trying to do in my life. There is so much work for me to do moving forward. This was a giant first step.

I don’t know for certain where I’m headed. But I know that DIA will always hold a special place in my heart. DIA was the lifequake I needed five years ago. And while this may be farewell for now, it’s not goodbye forever. 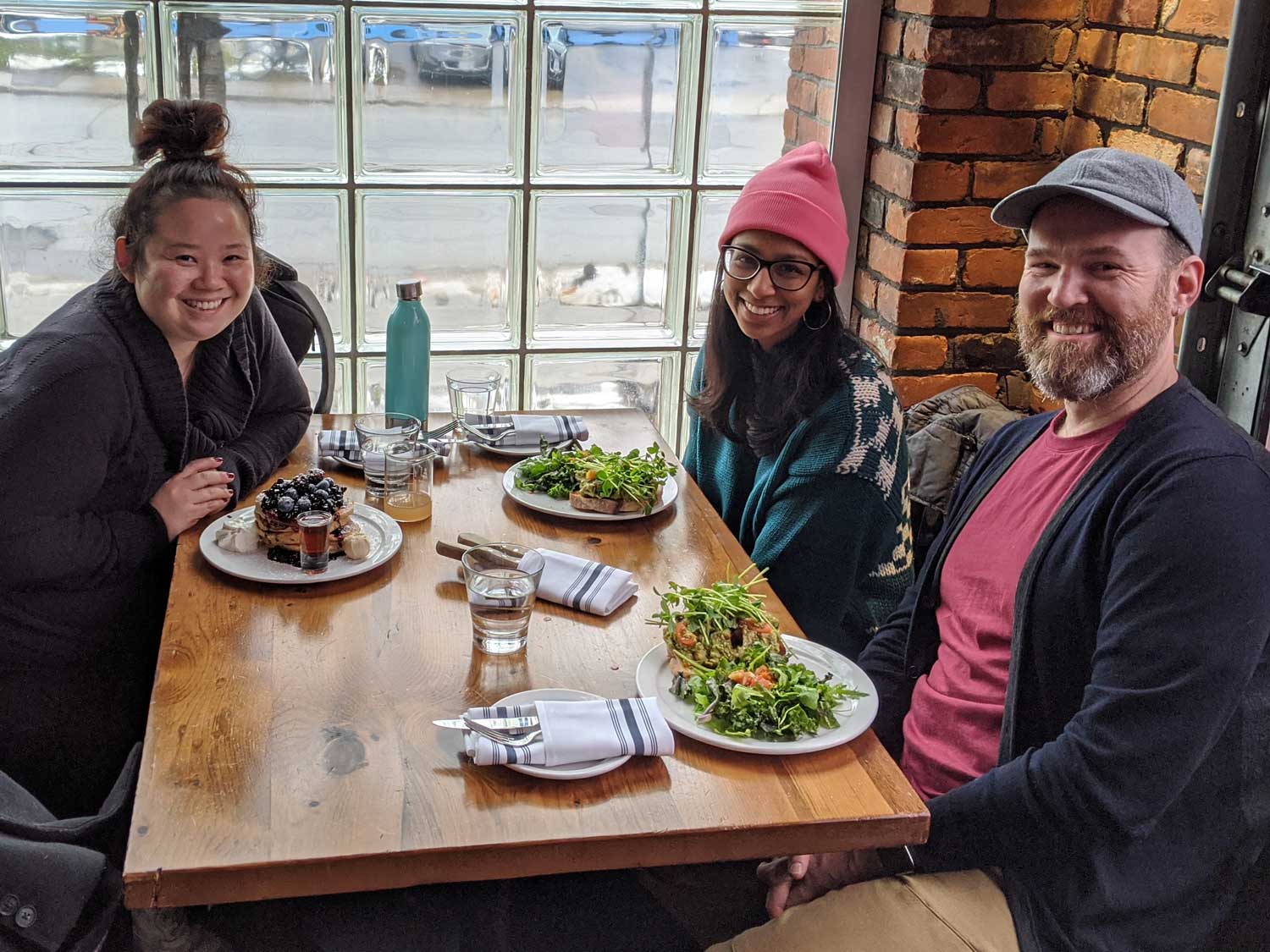 Blair is a trained playwright, designer by trade, and traveler for life. He is the Executive Director of the DIA and loves all kinds of food.